Year 9 are growing in confidence with their weekly drama workshops. This is a special time where we help all pupils to explore some of their creative ideas, as well as to boost individual confidence within the group.

We started off a recent Year 9 drama session by warming up with the Trail Game. A path of coloured paper is laid out on the drama floor. Each pupil takes it in turns to try and reach one end of the trail to the other by answering some questions. We need to provide three correct answers to reach the end of the trail. 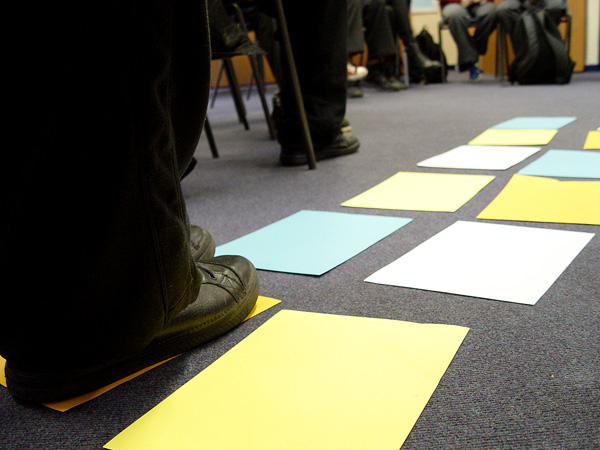 We use this warm up as an opportunity to remind pupils about the current themes they are studying in literacy, as well as general knowledge questions. Year 9 have been learning recently about balanced arguments, using the issue of urban foxes as a debating subject. Some of the Trail Game questions included:

What is the name of a female fox?

What do we call the habitat where foxes live?

Year 9 were now warmed up and ready for the main drama theme for the session – improvisation!

We asked the students what is meant by improvisation? We learnt that it involves using your creativity to come up with a short piece of drama that doesn’t involve a script.

The scene for our acting was then set. We asked Year 9 pupil to pair up with a friend. One actor played the role of a driver whose car had broken down, whilst their partner was an RAC mechanic. We added an extra twist – the driver had to take on the role of a particular character. These included pirates, princesses or a photographer. The other pupils had to guess this character from the improvisation talents.

Can you tell what the roles are in the video above?