Year 11 recently completed a couple of science experiments to test two theories that we have about the properties contained in oil. The pupils have been producing some lavender oil during our regular visits to the Roots and Shoots garden project. This involved crushing the lavender to extract the oil, and then boiling this in some water. We found that the oil separated from the water.

This then led Year 11 to set up a similar scientific experiment back in the Lansdowne lab. We held a brief class discussion, and found out that most of us use oil to cook with at home, rather than water. One possible theory for this was that oil might have a higher boiling point and so is better for cooking with. 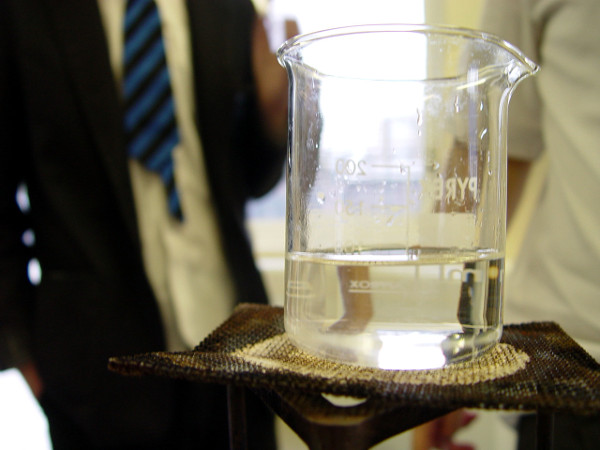 The aim was then set to discover the boiling point of both water and oil. Our apparatus included a heat mat, a bunsen burner, a tripod, a grill and two beakers – one containing 100 ml of water, and the other containing 100 ml of cooking oil. We wanted to keep this a fair test. A thermometer was used to measure the temperature.

The method for our experiment involved both beakers being boiled simultaneously. The students were looking out for bubbles forming in each liquid. This is a sign that the liquid is starting to boil. Once it had boiled the plan was to take the temperature.

Safety was very important in this experiment. All Year 11 pupils wore safety goggles and were briefed on the possible dangers. This proved to be a timely intervention as one of the thermometers was shattered by the heat of the oil just as it reached boiling point!

As an alternative way of reaching our conclusion, we were then able to state that oil has a higher boiling point. We knew this because the thermometer measuring the heat of the oil broke, whilst the one with the water didn’t!

Our second science experiment involved mixing water and oil. Both fluids were placed in a test tube which was then shaken. We observed that the oil rose to the top, leaving the water separated at the bottom.

It was explained that we needed an emulsifier to try and bond them together. This is a third fluid that can grab the molecules at the opposite ends in the water and oil, and then work to bring them together.

We found that washing up liquid is a good emulsifier. When we added this to our test tube, the water and oil were able to mix together. This process is explained in the short video below.